Here is a graph from the Atlanta Fed weekly Financial Highlights released today (graph as of June 23rd): 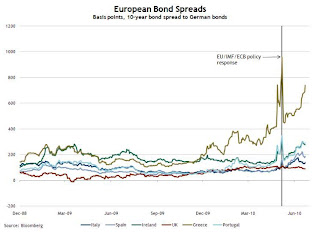 Greek bond spreads (over German bonds) have risen recently, near the highs seen before the European policy package was announced in early May.

Other euro zone countries’ bond spreads are also elevated during the same period.

Since tightening in early May, the 10-year Greece-to-German bond spread has risen to nearly 300 basis points (bps) (from 4.38% to 7.39%) through June 22. Other European peripherals’ spreads are elevated, with Portugal up 138 bps over the period, Ireland up 111 bps, and Spain 86 bps higher.

Note: The Atlanta Fed data is one day old. Nemo has links to the current data on the sidebar of his site.

The spreads have widened further today: Greece is up sharply to 781 bps today.

And a market update from Doug Short of dshort.com (financial planner).

Click on graph for interactive version in new window.

The graph has tabs to look at the different bear markets - "now" shows the current market - and there is also a tab for the "four bears".

And here is the quote of the day from BofA (via Bloomberg, ht Bill):

"Given the depth of the nation’s recessionary impacts on homeowners, a considerable number of customers will transition from homeownership over the next two years."
Barbara Desoer, president of Bank of America’s home-loan and insurance unit, said in testimony prepared for a congressional hearing June 24, 2010