Note: This was a difficult comparison because of the timing of Memorial Day. 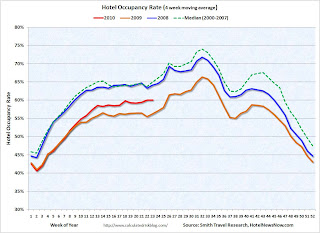 Notes: the scale doesn't start at zero to better show the change.

The graph shows the distinct seasonal pattern for the occupancy rate - higher in the summer because of leisure/vacation travel.

The occupancy rate collapsed in the 2nd half of 2008 (blue line), and 2009 was the worst year since the Great Depression.

For the last three months, the occupancy rate has been running above the same period in 2009 - but still well below the normal level.