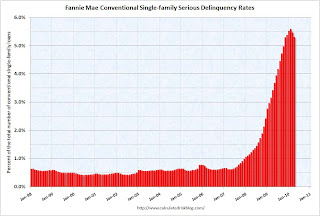 Fannie Mae reported today that the rate of serious delinquencies - at least 90 days behind - for conventional loans in its single-family guarantee business decreased to 5.30% in April, down from 5.47% in March - and up from 3.42% in April 2009.

This is similar to the report from Freddie Mac (although Fannie Mae releases data one month later). Just as for Freddie Mac, some of the earlier rapid increase was probably because of foreclosure moratoriums, and distortions from modification programs because loans in trial mods were considered delinquent until the modifications were made permanent.

More modifications have become permanent (and no longer counted as delinquent) and Fannie Mae is foreclosing again (they have a record number of REOs) - so there has been a slight decline in the delinquency rate.