From Reuters: Mortgage Rates Drop to Lowest Level on Record

Interest rates on U.S. 30-year fixed-rate mortgages, the most widely used loan, averaged 4.69 percent for the week ended June 24, the lowest since Freddie Mac started the survey in April 1971. 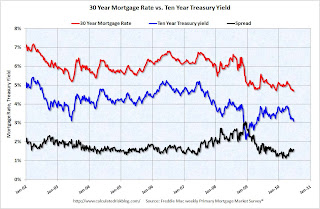 The decline in mortgage rates is related to the weak economy and falling treasury yields.
Posted by Calculated Risk on 6/24/2010 10:54:00 AM
Newer Post Older Post Home