As part of the new home sales report, the Census Bureau reported that the median price for new homes fell to the lowest level since 2003. 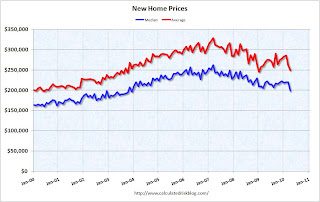 This graph shows the median and average new home price. It appears the builders sold at a lower price point in April, and that helped boost sales.

This makes sense since many of the buyers were trying to take advantage of the housing tax credit (and probably using FHA insurance). Since the modification programs and the delays in foreclosure limited the number of distressed sales - many buyers at the low end found buying a new home easier than buying an existing home. 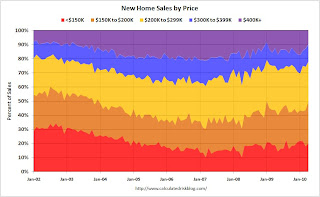 The second graph shows the percent of new home sales by price.