Mortgage Delinquencies by Period and by State

Note: there are some questions about the seasonal adjustment, especially for the 90 day bucket since we've never seen numbers this high before, but the adjustment for the 30 and 60 day periods are probably reasonable. 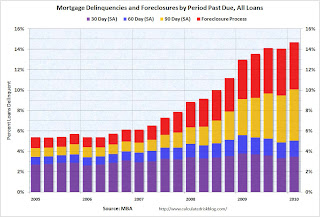 Delinquent loans in the 60 day bucket increased too, and are also close to the Q4 2008 level. This suggests that the pipeline is still filling up at a high rate, but slightly below the rates of early 2009.

These seriously delinquent loans are the 4.3 million loans MBA Chief Economist Jay Brinkmann referred to as the "shadow inventory" on the conference call this morning. Not all are really "shadow inventory" since some of these loans will be modified, some will be cured (probably very few), and some are probably already listed as short sales. But it does suggest a significant number of distressed sales coming. 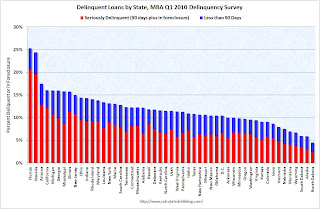 The second graph shows the delinquency rate by state (red is seriously delinquent: 90+ days or in foreclosure, blue is delinquent less than 90 days).

This highlights a couple more points that Brinkmann made this morning: 1) the largest category of delinquent loans are fixed rate prime loans, and 2) this is not just a "sand state" problem. Brinkmann argued the foreclosure crisis is now being driven by economic problems as opposed to the bursting of the housing price bubble - and this is showing up in prime loans and all states. Although Florida and Nevada are very high, notice that the blue bar (new delinquencies) are higher in many other states.

Thirty four states and the District of Columbia have total delinquency rates over 10%. This is a widespread problem.