From Keith Bradsher at the NY Times: Europe’s Debt Crisis Is Casting a Shadow Over China

The steep rise of the renminbi prompted a Commerce Ministry official in Beijing to warn Monday that China’s exports could be threatened. ...

“The yuan has risen about 14.5 percent against the euro during the past four months, which will increase cost pressure for Chinese exporters and also have a negative impact on China’s exports to European countries,” Yao Jian, the ministry’s spokesman, said at a news conference in Beijing, according to news services.
...
Because American companies in particular compete in the Chinese market with European companies in many industries, the euro’s weakness against the renminbi is putting American companies at a disadvantage ... 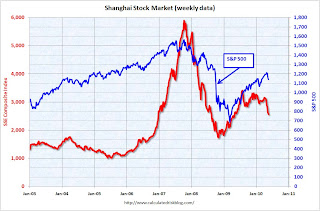 As I noted a few weeks ago ... keep an eye on the Shanghai index (in red).

This graph shows the Shanghai SSE Composite Index and the S&P 500 (in blue).