The Employment-Population ratio increased to 58.8% in April (from 58.6% in March), after plunging since the start of the recession. This is about the same level as in December 1983. 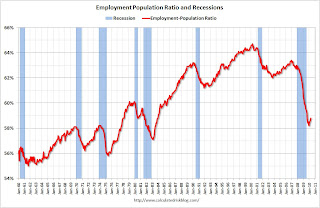 The Labor Force Participation Rate increased to 65.2% from 64.9% in March. This is the percentage of the working age population in the labor force. This is still well below the 66% to 67% rate that was normal over the last 20 years. As people return to the labor force, as the employment picture improves, this will put upward pressure on the unemployment rate - even with job growth. 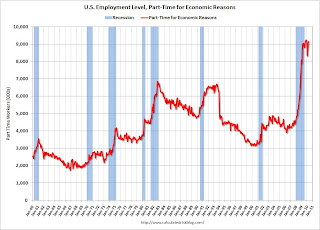 The number of persons employed part time for economic reasons (sometimes referred to as involuntary part-time workers) was about unchanged at 9.2 million in April. These individuals were working part time because their hours had been cut back or because they were unable to find a full-time job.

The number of workers only able to find part time jobs (or have had their hours cut for economic reasons) was at 9.152 million in April.

The all time record of 9.24 million was set in October.

These workers are included in the alternate measure of labor underutilization (U-6) that was at 17.1% in April. 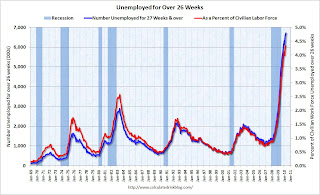 According to the BLS, there are a record 6.72 million workers who have been unemployed for more than 26 weeks (and still want a job). This is a record 4.34% of the civilian workforce. (note: records started in 1948)

Although the headline number of 290,000 payroll jobs was a positive (this is 224,000 after adjusting for the 66,000 Census 2010 temporary hires), the underlying details were mixed. The positives: the employment-population ratio increased (after plunging sharply), and average hours increased.

Negatives include the unemployment rate increasing to 9.9%, a near record number of part time workers (for economic reasons) pushing U-6 to 17.1%, and a record number of workers unemployed for more than 26 weeks.