From the Association of American Railroads: Rail Time Indicators. The AAR reports traffic in March 2010 was up 7.5% compared to March 2009 - the first year-over-year increase since July 2008 - although traffic was still 11.5% lower than in March 2008. 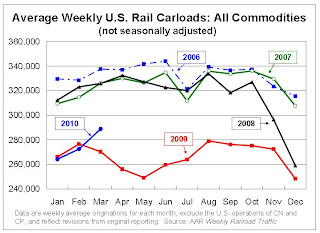 The graph above shows that rail traffic collapsed in November 2008, and now nine months into the recovery, traffic hasn't even recovered half way. This is clearly not a "V-shaped" recovery - this is far more moderate and sluggish (although the pickup in March traffic was sharp). 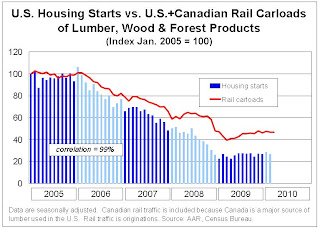