The English version of the Black Report on the Iceland bank failures was released today. It has it all - regulatory capture, oblivious politicians, shadow banking, loans to shareholders to buy shares and more. (ht Steinn)

The following graph is from Chapter 21: Causes of the Collapse of the Icelandic Banks - Responsibility, Mistakes and Negligence 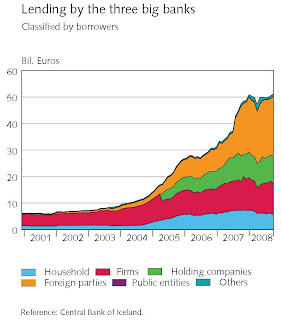 Click on graph for larger image in new window

Here is an excerpt from the long report:

[This figure] shows the lending of the three big banks’ parent companies, classified by type of borrowers. The lending by the parent companies amounted usually to 50-60% of all lending by the banking groups from mid-2004. ... the largest and steadiest increase in lending was to holding companies on the one hand and to foreign parties on the other. The increase in lending to foreign parties was notably larger. The increase was especially big during the latter part of 2007. During the first part of 2007 the Icelandic banks increased their lending to foreign parties by 800 million EUR, to 8.3 billion EUR. During the latter part of that year, i.e. after the beginning of the international liquidity crisis in mid-summer 2007, the lending to foreign parties increased however by 11.4 billion EUR, to 20.7 billion EUR. Thereby, lending by the banks’ parent companies to foreign parties increased by more than 120% in just six months. As stated in Chapter 8, this increase was seen in all three banks, an increase of 5 billion in Kaupthing and 3 billion each in Landsbanki and Glitnir. The [Special Investigation Commission] (SIC) notes that this increased lending started at about the same time as the liquidity crisis in the international financial markets began. The increase was so substantial that it can be assumed that many of the new customers had turned to the Icelandic banks after other banks had made arrangements to reduce their lending and that these customers had therefore been refused service by other banks.

It sounds like the Icelandic banks were making bad loans right at the wrong time.

One of the key problems identified in the report is "weak equity". Although some of these arrangment were complicated, basically the bank would loan money to an owner who would buy shares in the bank - and use those shares as collateral for the loan. This boosted the apparent capital, and allowed the bank to lend more money. Amazing.

The largest owners of all the big banks had abnormally easy access to credit at the banks they owned, apparently in their capacity as owners.
...
The banks had invested their funds in their own shares. Share capital, financed by the company itself, is not the protection against loss it is intended to be. Here this is referred to as “weak equity”. Weak equity in the three banks amounted to about ISK 300 billion by mid year 2008. At the same time, the capital base of the banks was about ISK 1,186 billion in total. Weak equity, therefore, represented more than 25% of the banks’ capital base. If only the core component of the capital base is examined, i.e. shareholders’ equity, according to the annual accounts, less intangible assets, the weak equity of the three banks amounted to more than 50% of the core component in mid year 2008.

Geesh - that reminds me of Enron.