The Employment-Population ratio ticked up slightly to 58.6% in March, after plunging since the start of the recession. This is about the same level as in 1983. 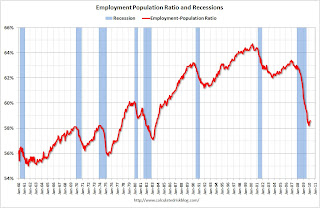 The Labor Force Participation Rate increased slightly to 64.9% (the percentage of the working age population in the labor force). This is at the level of the early 80s. Many of these people will return to the labor force when the employment picture improves - and that will keep the unemployment rate elevated unless net hiring picks up dramatically. 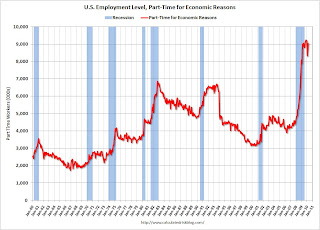 The number of persons working part time for economic reasons (sometimes re-
ferred to as involuntary part-time workers) increased to 9.1 million in March.
These individuals were working part time because their hours had been cut back
or because they were unable to find a full-time job.

The number of workers only able to find part time jobs (or have had their hours cut for economic reasons) increased sharply to 9.1 million.

The all time record of 9.2 million was set in October. This suggests the increase last month was not weather related - and is not a good sign. 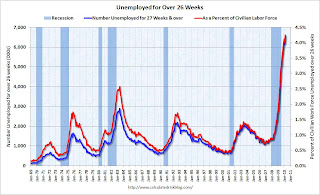 According to the BLS, there are a record 6.55 million workers who have been unemployed for more than 26 weeks (and still want a job). This is a record 4.3% of the civilian workforce. (note: records started in 1948)

The number of long term unemployed is one of the key stories of this recession.

Although the headline number of 162,000 payroll jobs was a positive (this is 114,000 after adjusting for Census 2010 hires), the underlying details were mixed. The positives: the unemployment rate was steady, the employment-population ratio ticked up slightly (after plunging sharply), and average hours increased (might have been impacted by the snow in February).