Note: This is a composite index based on a number of economic releases.

Led by improvements in production- and employment-related indicators, the Chicago Fed National Activity Index increased to –0.07 in March, up from –0.44 in February. Three of the four broad categories of indicators that make up the index made positive contributions in March, while the consumption and housing category made the lone negative contribution.

The index’s three-month moving average, CFNAI-MA3, increased to –0.18 in March from –0.31 in February. March’s CFNAI-MA3 suggests that growth in national economic activity, while still below average, continues to improve. 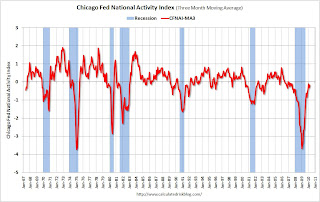 We are now about 9 months into the recovery, and growth by most indicators is still below trend.
Posted by Calculated Risk on 4/29/2010 09:40:00 AM
Newer Post Older Post Home