Twenty-seven states recorded over-the-month unemployment rate increases, 7 states and the District of Columbia registered rate decreases, and 16 states had no rate change, the U.S. Bureau of Labor Statistics reported today. Over the year, jobless rates increased in 46 states and the District of Columbia and declined in 4 states.
...
Michigan again recorded the highest unemployment rate among the states, 14.1 percent in February. The states with the next highest rates were Nevada, 13.2 percent; Rhode Island, 12.7 percent; California and South Carolina, 12.5 percent each; and Florida, 12.2 percent. North Dakota continued to register the lowest jobless rate, 4.1 percent in February, followed by Nebraska and South Dakota, 4.8 percent each. The rates in Florida and Nevada set new series highs, as did the rates in two other states: Georgia (10.5 percent) and North Carolina (11.2 percent).
emphasis added 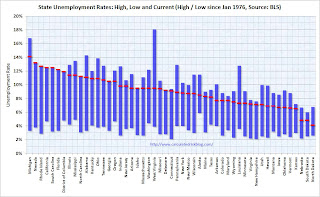