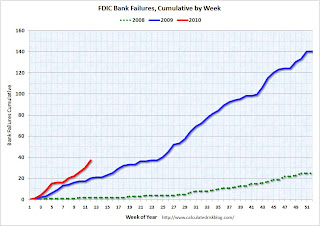 The FDIC started fast in 2010, but slowed down when the snow storm hit D.C. - now it looks like the pace is picking back up again. 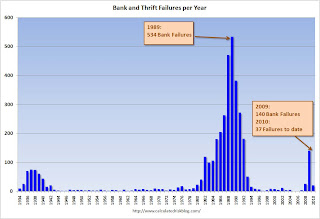 The second graph shows bank failures by year since the FDIC was started.

For those interested in bank failures by number of institutions and assets, the December Congressional Oversight Panel’s Troubled Asset Relief Program report through Nov 30th for 2009 (see page 45).
Posted by Calculated Risk on 3/20/2010 09:38:00 AM
Newer Post Older Post Home