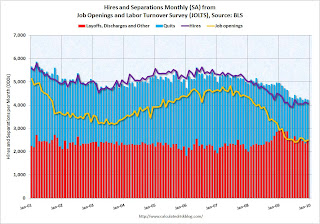 According to the JOLTS report, there were 4.073 million hires in December, and 4.238 million separations, or 165 thousand net jobs lost. The comparable CES report showed a loss of 150 thousand jobs in December (after revisions).

Separations have declined sharply from earlier in 2009, but hiring has not picked up. Quits (light blue on graph) are at a new low too. Usually "quits" are employees who have already found a new job (as opposed to layoffs and other discharges).

The low turnover rate is another indicator of a very weak labor market.
Posted by Calculated Risk on 2/09/2010 10:04:00 AM
Newer Post Older Post Home