Note: Here is weekly summary and a look ahead.

And reports on the speech:
From the WSJ: Bernanke Says Rate Increases Must Be an Option
From the NY Times: Bernanke Blames Weak Regulation for Financial Crisis

Dr. Bernanke said that monetary policy (a low Fed Funds rate) was probably not to blame for the housing bubble, and he used data from other countries to make this argument: "the relationship between the stance of monetary policy and house price appreciation across countries is quite weak".

He suggested the primary cause was the lack of effective regulation associated with non-traditional mortgage products.

I noted earlier that the most important source of lower initial monthly payments, which allowed more people to enter the housing market and bid for properties, was not the general level of short-term interest rates, but the increasing use of more exotic types of mortgages and the associated decline of underwriting standards. That conclusion suggests that the best response to the housing bubble would have been regulatory, not monetary. Stronger regulation and supervision aimed at problems with underwriting practices and lenders' risk management would have been a more effective and surgical approach to constraining the housing bubble than a general increase in interest rates. Moreover, regulators, supervisors, and the private sector could have more effectively addressed building risk concentrations and inadequate risk-management practices without necessarily having had to make a judgment about the sustainability of house price increases.
emphasis added

Here are his two slides about exotic mortgages: 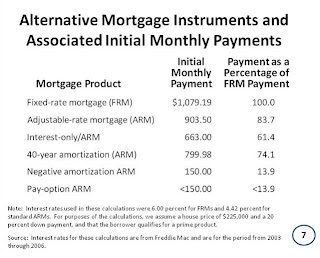 Slide 7 also shows initial monthly payments for some alternative types of variable-rate mortgages, including interest-only ARMs, long-amortization ARMs, negative amortization ARMs (in which the initial payment does not even cover interest costs), and pay-option ARMs (which give the borrower considerable flexibility regarding the size of monthly payments in the early stages of the contract). These more exotic mortgages show much more significant reductions in the initial monthly payment than could be obtained through a standard ARM. Clearly, for lenders and borrowers focused on minimizing the initial payment, the choice of mortgage type was far more important than the level of short-term interest rates. 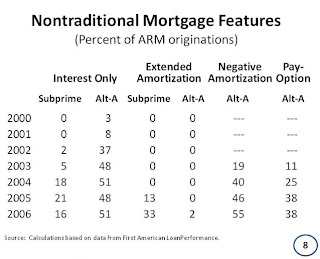 The availability of these alternative mortgage products proved to be quite important and, as many have recognized, is likely a key explanation of the housing bubble. Slide 8 shows the percentage of variable-rate mortgages originated with various exotic features, beginning in 2000. As you can see, the use of these nonstandard features increased rapidly from early in the decade through 2005 or 2006. Because such features are presumably not appropriate for many borrowers, Slide 8 is evidence of a protracted deterioration in mortgage underwriting standards, which was further exacerbated by practices such as the use of no-documentation loans. The picture that emerges is consistent with many accounts of the period: At some point, both lenders and borrowers became convinced that house prices would only go up. Borrowers chose, and were extended, mortgages that they could not be expected to service in the longer term. They were provided these loans on the expectation that accumulating home equity would soon allow refinancing into more sustainable mortgages.

But it seems Bernanke left out a couple key points.