The Census Bureau reports New Home Sales in December were at a seasonally adjusted annual rate (SAAR) of 342 thousand. This is a sharp decrease from the revised rate of 370 thousand in November (revised from 355 thousand). 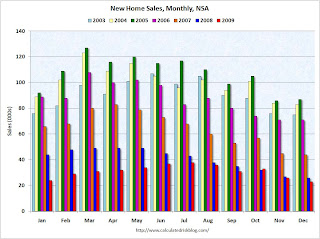 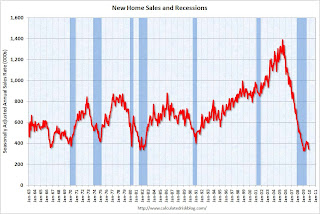 The second graph shows New Home Sales vs. recessions for the last 45 years. New Home sales fell off a cliff, but after increasing slightly, are now only 4% above the low in January. 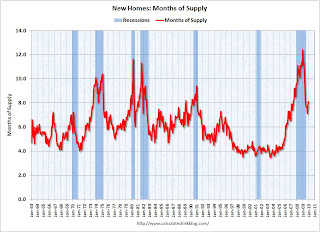 The seasonally adjusted estimate of new houses for sale at the end of December was 231,000. This represents a supply of 8.1 months at the current sales rate. 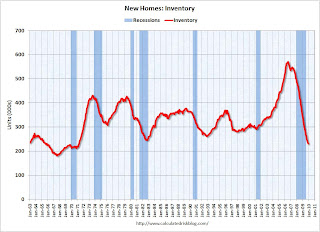 Months-of-supply and inventory have both peaked for this cycle, and sales might have bottomed too. New home sales are far more important for the economy than existing home sales, and new home sales will remain under pressure until the overhang of excess housing inventory declines much further.

Obviously this is another very weak report. I expect the Fed will change their statement on housing today. I'll have more later ...
Posted by Calculated Risk on 1/27/2010 10:00:00 AM
Newer Post Older Post Home