Here are a few more graphs based on the (un)employment report ...

The Employment-Population ratio continues to plunge, falling to 58.2% in December - the lowest level since 1983. 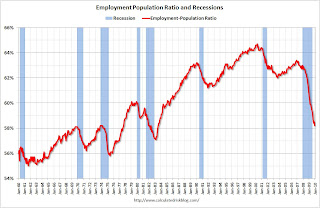 The Labor Force Participation Rate fell to 64.6% (the percentage of the working age population in the labor force). This is the lowest since the early 80s.

When the job market starts to recover, many of these people will reenter the workforce and look for employment - and that will keep the unemployment rate elevated for some time. 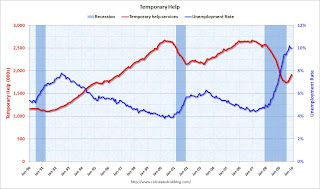 The thinking is that before companies hire permanent employees following a recession, employers will first increase the hours worked of current employees and also hire temporary employees. Since the number of temporary workers increased sharply, some people think this might be signaling the beginning of an employment recovery.

However, there has been some evidence of a shift by employers to more temporary workers, and the saying may become "We are all temporary now!", so use this increase with caution.

Tom Abate at the San Francisco Chronicle recently provided some caution on using temporary help as a guide:

The number of persons employed part time for economic reasons (sometimes referred to as involuntary part-time workers) was about unchanged at 9.2 million in December and has been relatively flat since March. These individuals were working part time because their hours had been cut back or because they were unable to find a full-time job. 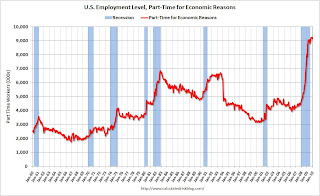 The number of workers only able to find part time jobs (or have had their hours cut for economic reasons) declined slightly to 9.165 million.

The all time record was set in October.

Overall this is a grim employment report.