DataQuick on California: Record Notices of Default filed in 2009 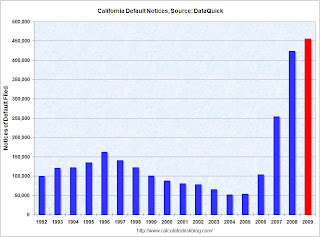 This graph shows the Notices of Default (NOD) by year through 2009 in California from DataQuick.

There were a record number of NODs filed in California last year, however the pace slowed in the 2nd half.

From DataQuick: Another Drop in California Mortgage Defaults

The number of California homes entering the foreclosure process declined again during fourth quarter 2009 amid signs that the worst may be over in hard-hit entry-level markets, while slowly spreading to more expensive neighborhoods. There are mixed signals for 2010: It's unclear how much of the drop in mortgage defaults is due to shifting market conditions, and how much is the result of changing foreclosure policies among lenders and loan servicers, a real estate information service reported.

A total of 84,568 Notices of Default ("NODs") were recorded at county recorder offices during the October-to-December period. That was down 24.3 percent from 111,689 for the prior quarter, and up 12.4 percent from 75,230 in fourth-quarter 2008, according to San Diego-based MDA DataQuick.

NODs reached an all-time high in first-quarter 2009 of 135,431, a number that was inflated by activity put off from the prior four months. In the second quarter of last year, NODs totaled 124,562. The low of recent years was in the third quarter of 2004 at 12,417, when housing market annual appreciation rates were around 20 percent.

"Clearly, many lenders and servicers have concluded that the traditional foreclosure process isn't necessarily the best way to process market distress, and that losses may be mitigated with so-called short sales or when loan terms are renegotiated with homeowners," said John Walsh, DataQuick president.

While many of the loans that went into default during fourth quarter 2009 were originated in early 2007, the median origination month for last quarter's defaulted loans was July 2006, the same month as during the prior three quarters. The median origination month during the last quarter of 2008 was June 2006. This means the foreclosure process has moved forward through one month of bad loans during the past 12 months.

"Mid 2006 was clearly the worst of the 'loans gone wild' period and it's taking a long time to work through them. We're also watching foreclosure activity start to move into more established mid-level and high-end neighborhoods. Homeowners there were able to make their payments longer than homeowners in entry-level neighborhoods, but because of the recession and job losses, that's changing. Foreclosure activity is a lagging indicator of distress," Walsh said.

The state's most affordable sub-markets, which represent 25 percent of the state's housing stock, accounted for 52.0 percent of all default activity a year ago. In fourth-quarter 2009 that fell to 34.9 percent. ...
emphasis added

In terms of units, the peak of the foreclosure crisis may be over, but the mid-to-high end foreclosures are increasing - and the values of these properties is much higher than the low end starter properties. This suggests that prices may have bottomed in some low end areas, but we will see further price declines in many mid-to-high end areas.
Posted by Calculated Risk on 1/27/2010 03:54:00 PM
Newer Post Older Post Home