However most people follow the Case-Shiller index, and the October Case-Shiller house price index will not be released until next Tuesday. Although Case-Shiller is an average of three months, I think that index will probably show a price decline too.

The following graph shows the LoanPerformance index (with and without foreclosures) and the Case-Shiller Composite 20 index in real terms (all adjusted with CPI less Shelter). 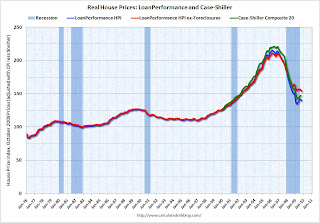 It is interesting to look at the sharp decline in the index with foreclosures at the end of 2008 - this was what housing economist Tom Lawler described as "destickification" in the high foreclosure areas.

Notice the LoanPerformance price index without foreclosures (in red) is now at the lowest level since September 2002 in real terms (inflation adjusted).

This isn't like 2005 when prices were way out of the normal range by most measures - and it is possible that total prices have bottomed (although I think prices will fall further), but prices ex-foreclosures probably still have a ways to go - even with all the government programs aimed at supporting house prices.