There were 2.5 million job openings on the last business day of October 2009, the U.S. Bureau of Labor Statistics reported today. The job openings rate was unchanged over the month at 1.9 percent. The openings rate has held relatively steady since March 2009. The hires rate (3.0 percent) and the separations rate (3.2 percent) were essentially unchanged and remained low. 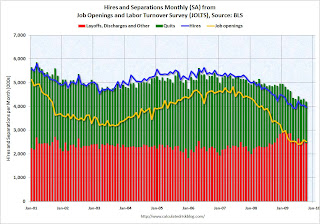 According to the JOLTS report, there were 3.966 million hires in October, and 4.203 million separations, or 237 thousand net jobs lost.

I'm not sure if openings are predictive of future hires (the data set is limited), but openings near a series low can't be a positive. Separations have declined sharply, with fewer quits and layoffs, but hiring has not picked up. And quits at a series low suggests those that are employed were holding on to their current jobs in October.
Posted by Calculated Risk on 12/08/2009 11:59:00 PM
Newer Post Older Post Home