Twenty-nine states and the District of Columbia recorded over-the-month unemployment rate increases, 13 states registered rate decreases, and 8 states had no rate change, the U.S. Bureau of Labor Statistics reported today. Over the year, jobless rates increased in all 50 states and the District of Columbia.
...
Michigan again recorded the highest unemployment rate among the states, 15.1 percent, in October. The states with the next highest rates were Nevada, 13.0 percent; Rhode Island, 12.9 percent; California, 12.5 percent; and South Carolina, 12.1 percent. The rate in California set a new series high, as did the rates in Delaware (8.7 percent) and Florida (11.2 percent). The District of Columbia also set a series high, 11.9 percent.
emphasis added 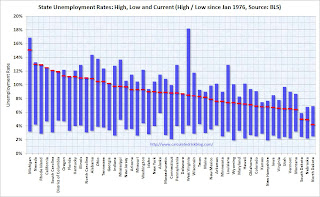