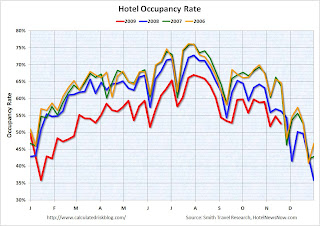 This graph shows the occupancy rate by week for each of the last four years (2006 through 2009 labeled by start of month).

Notes: the scale doesn't start at zero to better show the change. Thanksgiving was late in 2008 (and will be late in 2009), so the dip doesn't line up with the previous years.

“In the current cycle, it’s increasingly easy to predict supply and a little easier to predict demand,” [Mark Lomanno, STR’s president] said. “What is difficult is predicting rate growth ... how aggressive the industry will be in raising rates is virtually impossible to predict.”
...
Revenue per available room: 2009’s RevPAR will decline 17.0 percent (revised from 17.1 percent; it will drop 3.6 percent in 2010 (revised from -4.0 percent) before jumping 5.5 percent in 2011.

“The construction pipeline will mostly be built between now and early 2011,” Lomanno said.
...
Demand: Room demand in 2009 will be down 6.0 percent (revised from -5.5 percent) before turning positive in 2010 at +1.6 percent (revised from +1.3 percent). Demand will grow 3.2 percent in 2011, according to the STR forecast.
...
“Clearly commercial real estate will be a second shoe dropping in 2010,” [Randy Smith, STR’s co-founder and chairman] said. “That’s going to be a process that will hurt demand for the hotel industry. A huge chunk of demand for our industry will continue to be wiped out as long as the construction industry is on its back.”

Here is a PDF of the new forecast (free registration required)