On a monthly basis, retail sales decreased 1.5% from August to September (seasonally adjusted), and sales are off 5.7% from September 2008 (retail ex food services decreased 6.4%). 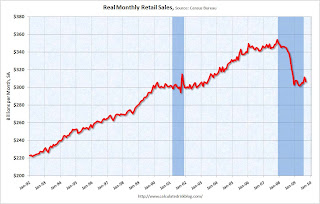 NOTE: The graph doesn't start at zero to better show the change.

This shows that retail sales fell off a cliff in late 2008, and appear to have bottomed, but at a much lower level. 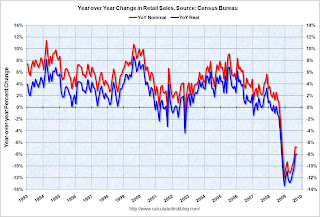 The second graph shows the year-over-year change in nominal and real retail sales since 1993.

To calculate the real change, the core PCI price index from the BLS was used (August prices were estimated as the average increase over the previous 3 months).

The large decrease in retail sales was because of the end of Cash-for-clunkers in August. Excluding autos, retail sales increased in September, but are still far below year ago levels.
Posted by Calculated Risk on 10/14/2009 08:30:00 AM
Newer Post Older Post Home