The Census Bureau reports New Home Sales in September were at a seasonally adjusted annual rate (SAAR) of 402 thousand. This is a decrease from the revised rate of 417 thousand in August (revised from 429 thousand). 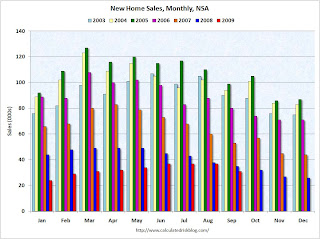 Note the Red columns for 2009. Sales in September 2009 (31 thousand) were below September 2008 (35 thousand). This is the 3rd lowest sales for September since the Census Bureau started tracking sales in 1963. 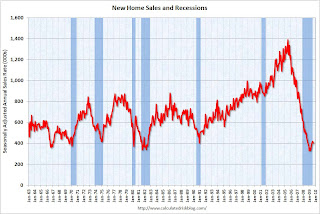 The second graph shows New Home Sales vs. recessions for the last 45 years. New Home sales fell off a cliff, but are now 22% above the low in January. 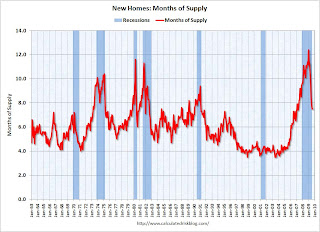 The seasonally adjusted estimate of new houses for sale at the end of September was 251,000. This represents a supply of 7.5 months at the current sales rate. 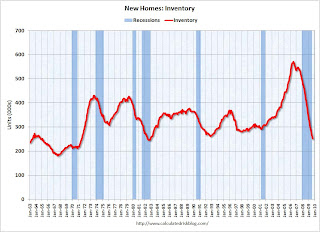 Months-of-supply and inventory have both peaked for this cycle, and new homes sales has probably also bottomed for this cycle. Sales were probably impacted by the end of the first-time home buyer tax credit (because of timing, new home sales are impacted before existing home sales).