Professors Hamilton and Krugman have mentioned that Q3 GDP will probably be reasonably strong, see Hamilton's No L and Krugman's A smidgen of optimism. I agree.

But I don't think growth in Q3, or even in Q4, are the question. The key question is what happens in early 2010. 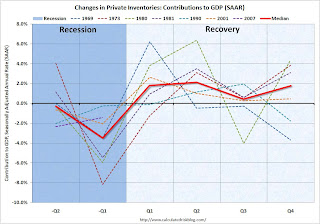 The Red line is the median of the last 5 recessions - and indicates about a 2% contribution to GDP from changes in inventories, for each of the first two quarters coming out of a recession. But this boost is always transitory.

Following the 1969 recession, changes in inventory added 6.2% to GDP in the first quarter of recovery - and GDP increased at an 11.5% (SAAR) that quarter. No one is predicting a quarter like that. But a 1% to 2% contribution from changes in inventories is possible.

And Personal Consumption Expenditures (PCE) will be strong too.

The following graph shows real PCE through August (2005 dollars). Note that the y-axis doesn't start at zero to better show the change. 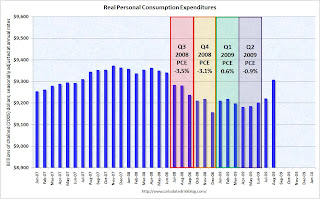 The quarterly change in PCE is based on the change from the average in one quarter, compared to the average of the preceding quarter.

The colored rectangles show the quarters, and the blue bars are the real monthly PCE.

The July and August numbers suggest PCE will grow at about a 3.6% (annualized rate) in Q3, however retail sales suggest less growth in September (July and August were boosted by cash-for-clunkers). So maybe we will see 3% PCE growth in Q3, and that would mean a contribution to GDP of about 2%.

However, I expect early 2010 to be a different story.