From the Office of the Comptroller of the Currency and the Office of Thrift Supervision: OCC and OTS Release Mortgage Metrics Report for Second Quarter 2009

This OCC and OTS Mortgage Metrics Report for the second quarter of 2009 provides performance data on first lien residential mortgages serviced by national banks and federally regulated thrifts. The report covers all types of first lien mortgages serviced by most of the industry’s largest mortgage servicers, whose loans make up approximately 64 percent of all mortgages outstanding in the United States. The report covers nearly 34 million loans totaling almost $6 trillion in principal balances and provides information on their performance through the end of the second quarter of 2009 (June 30, 2009).

Much of the report focuses on modifications and recidivism, but this report also shows far more seriously delinquent prime loans than subprime loans (by number, not percentage). 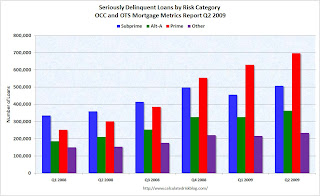 Note: "Approximately 13 percent of loans in the data were not accompanied by credit scores and are classified as “other.” This group includes a mix of prime, Alt-A, and subprime. In large part, the loans were result of acquisitions of loan portfolios from third parties where borrower credit scores at the origination of the loans were not available." 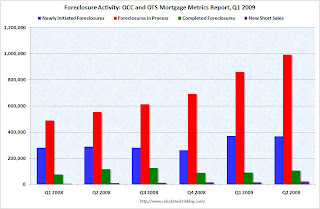 Notice that foreclosure in process are increasing sharply, but completed foreclosures were only up slightly.

The only reason initiated foreclosures declined slightly was because Q1 was revised up significantly. Short sales remain mostly irrelevant.

The next wave of completed foreclosures is about to break, but the size of the wave depends on the modification programs.
Posted by Calculated Risk on 9/30/2009 11:32:00 AM
Newer Post Older Post Home