A few more graphs based on the (un)employment report ... 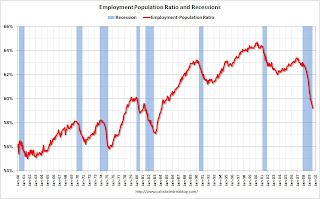 This graph show the employment-population ratio; this is the ratio of employed Americans to the adult population.

The general upward trend from the early '60s was mostly due to women entering the workforce. As an example, in 1964 women were about 32% of the workforce, today the percentage is closer to 50%.

This measure fell in August to 59.2%, the lowest level since the early '80s. This also shows the weak recovery following the 2001 recession - and the current cliff diving! 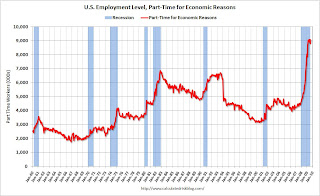 The number of workers only able to find part time jobs (or have had their hours cut for economic reasons) is at 9.076 million. This is only slightly below the peak of 9.084 million in May.

Note: the U.S. population is significantly larger today (about 305 million) than in the early '80s (about 228 million) when the number of part time workers almost reached 7 million. That is the equivalent of about 9.3 million today, so population adjusted this is not quite a record.

In August, the average workweek for production and nonsupervisory workers on private nonfarm payrolls was unchanged at 33.1 hours. The manufacturing workweek and factory overtime also showed no change over the month (at 39.8 hours and 2.9 hours, respectively). 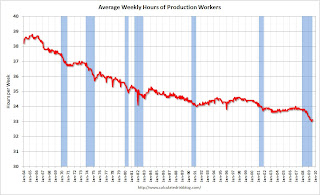 Some analyst look to an increase in this series as an indicator a recession is over. I guess they are still waiting.