The advance number for seasonally adjusted insured unemployment during the week ending Aug. 8 was 6.24 million. 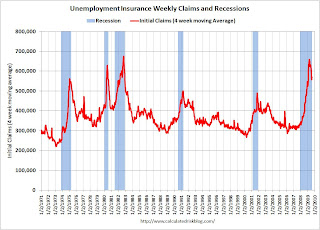 The four-week average of weekly unemployment claims increased this week by 4,250 to 570,000, and is now 88,750 below the peak of 19 weeks ago. It appears that initial weekly claims have peaked for this cycle - but the average has increased 22,000 from the low of two weeks ago.

It is difficult to calculate the number of workers who have exhausted their extended claims, but that number is expected to rise sharply over the next few months. From the O.C. Register: Estimate doubles for jobless losing benefits Sept. 1 (ht Keith)

An estimated 143,000 unemployed workers in California will exhaust their jobless benefits by Sept. 1, according to new figures released by the state Employment Development Department.

That's more than double the 61,906 state officials estimated a month ago. The number is based on workers who will exhaust the basic 26 weeks of benefits plus the three extensions approved by Congress.

If Congress does not approve a fourth extension in benefits, EDD projects that 264,000 Californians will be kicked off the unemployment rolls by the end of the year.