Nonfarm payroll employment continued to decline in July (-247,000), and the unemployment rate was little changed at 9.4 percent, the U.S. Bureau of Labor Statistics reported today. The average monthly job loss for May through July (-331,000) was about half the average decline for November through April (-645,000). In July, job losses continued in many of the major industry sectors. 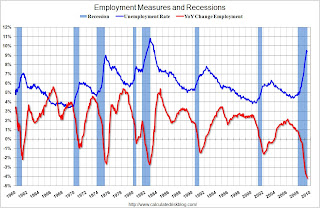 Nonfarm payrolls decreased by 247,000 in July. The economy has lost almost 5.7 million jobs over the last year, and 6.66 million jobs during the 19 consecutive months of job losses. 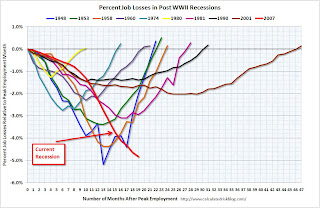 However job losses have really picked up over the last year, and the current recession is now the 2nd worst recession since WWII in percentage terms (and the 1948 recession recovered very quickly) - and also in terms of the unemployment rate (only early '80s recession was worse).

With fewer job losses ("only" a rate of 3 million job losses per year), and the dip in unemployment rate, this will be consider an improvement. It is still a weak employment report. Much more to come ...
Posted by Calculated Risk on 8/07/2009 08:30:00 AM
Newer Post Older Post Home