Note: Earlier this month, the seasonally adjusted weekly claims were distorted by changes in the patterns of auto layoffs this year. That is now over. 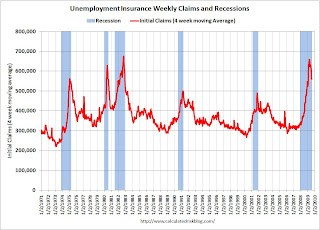 The four-week average of weekly unemployment claims decreased this week by 8,250, and is now 99,750 below the peak of 16 weeks ago. It appears that initial weekly claims have peaked for this cycle.

The level of initial claims has fallen fairly quickly - but is still very high (over 580K), indicating significant weakness in the job market.