In a research note, [Alliance Bernstein economist Joseph] Carson says job losses in prior downturns have been roughly proportional to the decline in gross domestic product. But in the current recession, the proportion of jobs lost is running about a third greater than the drop in real GDP.

The correlation between GDP growth and unemployment is called Okun’s Law, after the late economist Arthur Okun who documented it in the 1960s. But the numerical relationship that Okun estimated – and other economists have since refined – has broken down. His original estimate suggested about a 3% decline in GDP for every 1% increase in unemployment. Before joining the Fed, Ben Bernanke, working with Andrew Abel, figured more recent suggested about a 2% decrease in output for every 1% increase in unemployment. 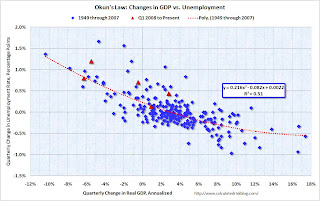 This graph shows the quarterly change in real GDP (annualized) vs. the change in unemployment rate. The red markers are for 2008 and Q1 2009.

Usually the trend line is drawn as linear, but I made it a 2nd order polynomial here.

The red markers are above the trend line, but within the normal scatter.

For Q2 the unemployment rate increased 1.2% (from Q1, quarterly average), and the annualized real GDP change will probably be in the -1% to -2% range - so that is also above the trend (a larger than expected change in unemployment based on the change in real GDP).

Okun's law is just a general relationship, and the relationship appears to have changed over time (as mentioned in the WSJ).

Note: the graph shows the quarterly change in real GDP annualized (the way it is reported by the BEA each quarter). In the WSJ post, they mentioned "a 2% [or 3%] decrease in output for every 1% increase in unemployment". A 2% decrease in quarterly output would be reported by the BEA as over 8% annualized for the quarter.
Posted by Calculated Risk on 7/11/2009 05:50:00 PM
Newer Post Older Post Home