The Surge in Rental Units

Please see this earlier post for graphs of the homeownership rate, and homeowner and rental vacancy rates.

The supply of rental units has been surging: 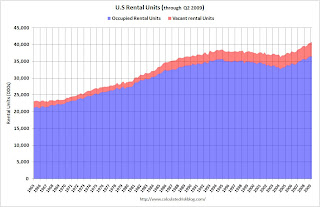 This graph shows the number of occupied (blue) and vacant (red) rental units in the U.S. (all data from the Census Bureau).

The total number of rental units (red and blue) bottomed in Q2 2004, and started climbing again. Since Q2 2004, there have been over 4.3 million units added to the rental inventory.

Note: please see caution on using this data - this number might be a little too high, but the concepts are the same even with a lower increase.

This increase in units has more than offset the recent strong migration from ownership to renting, so the rental vacancy rate is now at a record 10.6%.

Where did these approximately 4.3 million rental units come from?

The Census Bureau's Housing Units Completed, by Intent and Design shows 1.1 million units completed as 'built for rent' since Q2 2004. This means that another 3.2 million or so rental units came mostly from conversions from ownership to rentals.

These could be investors buying REOs for cash flow, condo "reconversions", builders changing the intent of new construction (started as condos but became rentals), flippers becoming landlords, or homeowners renting their previous homes instead of selling.

This huge surge in rental supply has pushed down rents, and pushed the rental vacancy rate to record levels.

Yes, people are doubling up with friends and family during the recession, and some renters are now buying again, but the main reason for the record vacancy rate is the surge in supply.