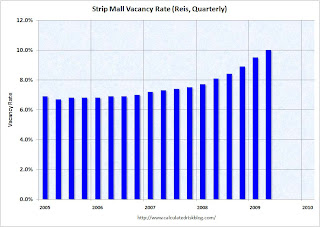 "Right now it looks like all signs are pointing to rents and vacancies, big components of income, getting shot down," [Victor Calanog, director of research for Reis] Inc said. "Until we see stabilization and recovery take root in both consumer spending and business spending and hiring, we do not foresee a recovery in the retail sector until late 2012 at the earliest."

A record decline in rents. Record regional mall vacancies. And no recovery seen in the retail CRE sector "until 2012 at the earliest". Grim.
Posted by Calculated Risk on 7/08/2009 08:38:00 PM
Newer Post Older Post Home