U.S. consumers made 675,351 bankruptcy filings in the first half, a 36.5 percent increase from a year ago, according to the American Bankruptcy Institute.

The monthly rate slowed in June (from May), but monthly ups and downs are not unusual for this data. 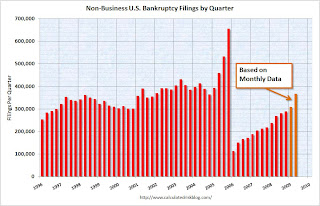 This graph shows the non-business bankruptcy filings by quarter.

Note: Quarterly data from Administrative Office of the U.S. Courts, Q1 and Q2 2009 based on monthly data from American Bankruptcy Institute.

The quarterly rate is close to the levels prior to when the Bankruptcy Abuse Prevention and Consumer Protection Act of 2005 (BAPCPA) took effect. There were over 2 million bankruptcies filed in Calendar 2005 ahead of the law change.