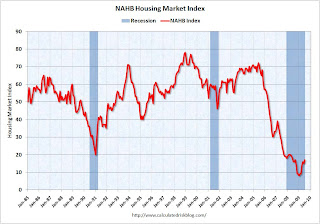 The housing market index (HMI) increased to 17 in July from 15 in June. The record low was 8 set in January.

This is still very low - and this is what I've expected - a long period of builder depression.

Note: any number under 50 indicates that more builders view sales conditions as poor than good.

Press release from the NAHB (added):

Builder confidence in the market for newly built, single-family homes notched up two points in July to its highest level since September 2008, according to the National Association of Home Builders/Wells Fargo Housing Market Index (HMI), released today. The HMI rose two points to 17 in July as builders saw an improvement in current sales conditions but continued to express concerns about the future.
...
“Although today’s HMI is positive news that helps confirm the market is bouncing around a bottom, the gain was entirely contained in the component gauging current sales conditions, while the component gauging sales expectations for the next six months remained virtually flat for a fourth consecutive month,” noted NAHB Chief Economist David Crowe. “Builders recognize the recovery is going to be a slow one and that we are facing a number of substantial negative forces.”