Note: this is not seasonally adjusted. There is a very distinct seasonal pattern for imports, but not for exports.

Sometimes port traffic gives us an early hint of changes in the trade deficit. The following graph shows the loaded inbound and outbound traffic at the ports of Los Angeles and Long Beach in TEUs (TEUs: 20-foot equivalent units or 20-foot-long cargo container). Although containers tell us nothing about value, container traffic does give us an idea of the volume of goods being exported and imported. 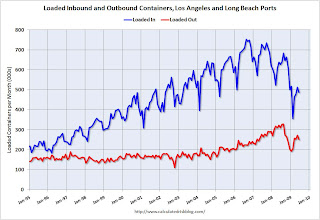 There had been some recovery in U.S. exports over the last few months (the year-over-year comparison was off 30% from December through February). And this showed up in the in the May trade report, but the port data suggests exports were a little weaker in June.