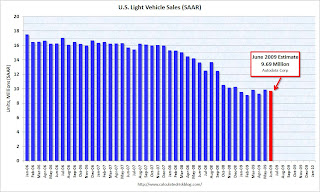 June was about average for the year so far on seasonally adjusted basis, and sales are still on pace to be the worst since 1967. 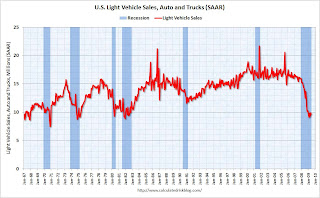 The small increase in June hardly shows up on the graph.

In 1967 there were 103 million drivers and 9.54 million light vehicles sold; now there are about twice that many (205.7 million licensed drivers in 2007). Compared to the number of drivers, the current sales rate is the lowest since the BEA started tracking auto sales.