Industrial production decreased 1.1 percent in May after having fallen a downward-revised 0.7 percent in April. The average decrease in industrial production during the first three months of the year was 1.6 percent. Manufacturing output moved down 1.0 percent in May with broad-based declines across industries. Outside of manufacturing, the output of mines dropped 2.1 percent, and the output of utilities fell 1.4 percent. At 95.8 percent of its 2002 average, overall industrial output in May was 13.4 percent below its year-earlier level. The rate of capacity utilization for total industry declined further in May to 68.3 percent, a level 12.6 percentage points below its average for 1972-2008. Prior to the current recession, the low over the history of this series, which begins in 1967, was 70.9 percent in December 1982.emphasis added 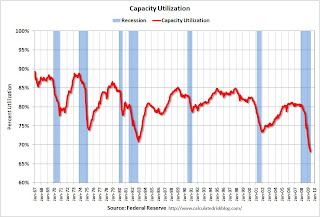 This graph shows Capacity Utilization. This series is at another record low (the series starts in 1967).

In addition to the weakness in industrial production, there is little reason for investment in new production facilities until capacity utilization recovers.
Posted by Calculated Risk on 6/16/2009 09:15:00 AM
Newer Post Older Post Home