How many Homeowners Sold to Rent at the Peak?

TJ & The Bear asks: "ocrenter had an interesting question over at JtR's BubbleInfo. Specifically, what percentage of homeowners that sold during the height of the bubble (04 to 06) went to cash and rented?" ocrenter is obviously curious about "cash on the housing sidelines".

We don't have the data to answer that question, but using the Census Bureau Residential Vacancies and Homeownership report, we can see that the number of occupied rental units bottomed in Q2 2004. 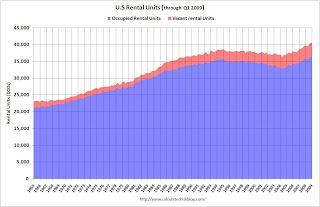 This graph shows the number of occupied (blue) and vacant (red) rental units in the U.S. (all data from the Census Bureau).

The number of occupied rental units bottomed in Q2 2004, and has increased by 3.8 millions units since then.

The homeownership rate also peaked in 2004, although it didn't start declining sharply until 2007. 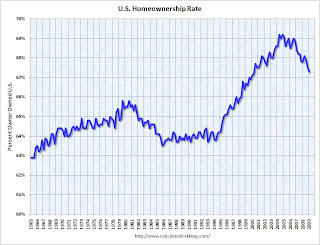 Note: graph starts at 60% to better show the change.

There are probably several reasons why the number of renters started increasing in the 2nd half of 2004 (even though the housing bubble didn't peak in activity until the summer of 2005, and in prices until the summer of 2006.) More and more renters probably thought housing prices were too high by 2004 and put off buying, and some homeowners probably sold and became renters ...

To answer ocrenters question (somewhat), the number of renters increased by about 1.6million in the 2004 to 2006 period. A large number of those renters could have been homeowners who decided to sell and rent. We just don't have the data ...