"Our contract cancellation rate of 24% for the second quarter is at a more normalized level, the likes of which we have not reported since the third quarter of 2005,"
Ara K. Hovnanian, President and CEO Hovnanian Enterprises, June 2, 2000

The following graph shows the average cancellation rates for some selected homebuilders that I've been tracking. 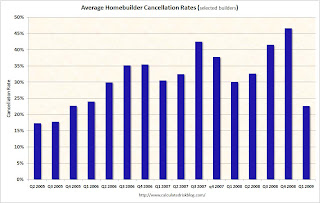 There appears to be a seasonal pattern (fewer cancellations in Q1), but most of the builders are reporting the lowest cancellation rates since the bubble burst.

The cancellation rate could rise again if mortgage rates move higher, but this is a little bit of good news for the builders. Here are a couple of comments I posted last month: