From the WaPo: U.S. Hopes To Recoup GM Outlay In 5 Years

The United States would recover most of its planned $50 billion investment in General Motors within five years, according to a preliminary Treasury Department estimate that foresees the company ...

Among the key variables in any such forecast is the number of new cars sold annually in the United States as well as the estimate of GM's share of the market.

During the boom years, the annualized figure for car sales in the United States hovered around 16 million. Recently, it has fallen to between 9 million and 10 million on an annualized basis.

In regulatory filings, GM has estimated that the car market will rebound to 16 million by 2012. 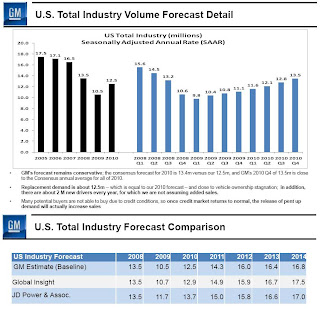 This table from the GM Restructuring Plan (back in February) shows the GM baseline U.S. auto sales forecast and a comparison with J.D. Power and Global Insight forecasts. 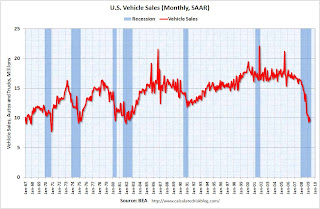 GM expects a modest recovery in sales over the next couple of years - and that seems somewhat reasonable - but it is important to remember that sales during the bubble were inflated as homeowners withdrew equity to buy vehicles. So achieving the levels of the boom years any time soon seems unlikely.