The region's manufacturing sector continued to show weakness in May ... Although the indexes for general activity, shipments, and employment improved, the index for new orders declined slightly. ... Most of the survey's broad indicators of future activity improved notably again this month, suggesting that the region's manufacturing executives are more optimistic that a recovery will occur over the next six months.

The survey's broadest measure of manufacturing conditions, the diffusion index of current activity, increased from -24.4 in April to -22.6 this month. Although an indication of continued overall decline, this reading is the index's highest since last September; it has now edged higher for three consecutive months. Still, the index has been negative for 17 of the past 18 months, a span that corresponds to the current recession.
...
Broad indicators of future activity showed improvement again this month. The future general activity index remained positive for the fifth consecutive month and increased 11 points, from 36.2 in April to 47.5. The index has now increased 33 points in the past two months (see Chart). 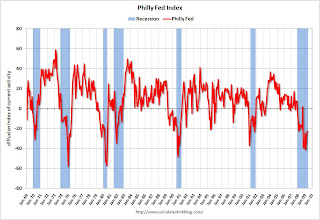 This graph shows the Philly index for the last 40 years.