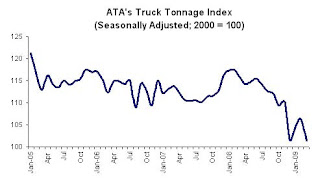 The American Trucking Associations’ advanced seasonally adjusted (SA) For-Hire Truck Tonnage Index fell 4.5 percent in March, marking the first month-to-month decrease of 2009. The gains during the previous two months, which totaled 4.5 percent, were erased with March’s drop. (February’s increase was revised down to 1.5 percent.) In March, the SA tonnage index equaled just 101.4 (2000 = 100), which is its lowest level since March 2002. The fleets did report higher volumes than in February, as the not seasonally adjusted (NSA) index increased 10.2 percent, but that is well below the 15 to 20 percent range that NSA tonnage usually rises from February to March. In March, the NSA index equaled 104.7.

Compared with March 2008, tonnage contracted 12.2 percent, which was the second-worst year-over-year decrease of the current cycle. In December 2008, the largest year-over-year contraction, tonnage dropped 12.5 percent from a year earlier.

ATA Chief Economist Bob Costello said he wasn’t too surprised at March’s reading. “Many fleets were telling us during March that freight was getting a little better. The problem is that freight should be significantly better in March, which is why the seasonally adjusted index fell,” Costello said. “While the industry is desperate for some positive news, it is unfortunate that March’s data suggests the industry has not hit bottom just yet.”