In March, the number of persons working part time for economic reasons (some-times referred to as involuntary part-time workers) climbed by 423,000 to 9.0 million. 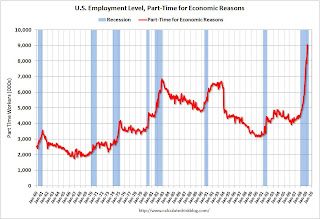 Not only has the unemployment rate risen sharply to 8.5%, but the number of workers only able to find part time jobs (or have had their hours cut for economic reasons) is now at a record 9.0 million.

Of course the U.S. population is significantly larger today (about 305 million) than in the early '80s (about 228 million) when the number of part time workers almost reached 7 million. That is the equivalent of about 9.3 million today, so population adjusted this isn't quite a record - yet - but it is getting close.