To add to the previous post, here is another way to look at existing homes sales - monthly, Not Seasonally Adjusted (NSA): 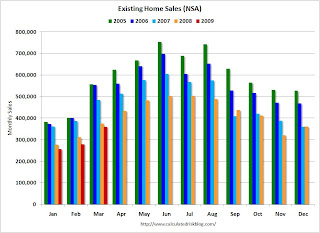 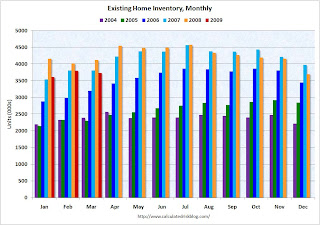 The second graph shows inventory by month starting in 2004.

Inventory levels were flat during the bubble, but started increasing at the end of 2005.

It is important to watch inventory levels very carefully. If you look at the 2005 inventory data, instead of staying flat for most of the year (like the previous bubble years), inventory continued to increase all year. That was one of the key signs that led me to call the top in the housing market!

Note: there is probably a substantial shadow inventory – homeowners wanting to sell, but waiting for a better market - so existing home inventory levels will probably stay elevated for some time. There is also the possibility of some REOs being held off the market. 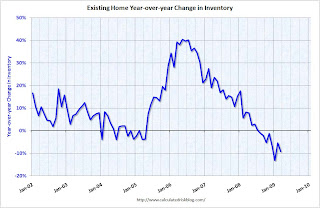 This shows the YoY change has turned negative.

If the trend of declining year-over-year inventory levels continues in 2009 that will be a positive for the housing market. Prices will probably continue to fall until the months of supply reaches more normal levels (in the 6 to 8 month range), and that will take some time.