Some very ugly credit card charge-off data just out from Capital One. The February annualized rate of 8.06% has spiked by over 1% month-over-month to the current 9.33%, a very troubling deterioration ... 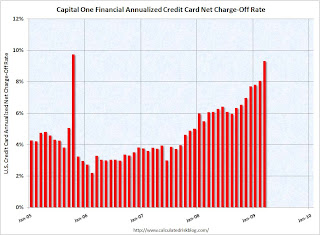 Notice the spike in 2005 associated with a surge in bankruptcy filings ahead of the Bankruptcy Abuse Prevention and Consumer Protection Act of 2005 (BAPCPA).

And a market graph too from Doug Short of dshort.com (financial planner): "Four Bad Bears".