Much has been made about the personal saving rate falling to zero during the housing bubble, and rising sharply in recent months. This decline in the saving rate was probably related to homeowner's borrowing against their homes.

However this didn't capture MEW. The following two graphs show the impact of MEW. Note: I used 50% of MEW, because that appears to be the amount consumed. 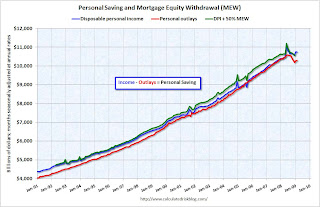 The BEA defines personal saving as the difference between the blue and red lines:

However many people acted as if MEW was income, and that would mean personal saving was the difference between the green and red lines. 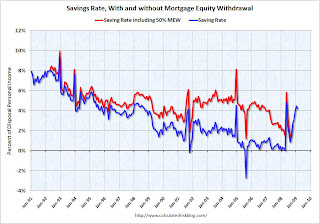 The second graph shows the same data except as a saving rate.

As Professor Olney mentioned to me, the aggregate saving rate captures the behavior of both savers (who probably didn't change their behavior) and "dissavers" (who borrowed heavily). The saving rate declined to zero, probably because the dissavers were using MEW as income.

Now that the Home ATM is closed, the saving rate is rising because of less borrowing - as dissavers are forced to live within their incomes.