The Census Bureau reports New Home Sales in February were at a seasonally adjusted annual rate of 337 thousand. This is slightly above the record low of 322 thousand in January. 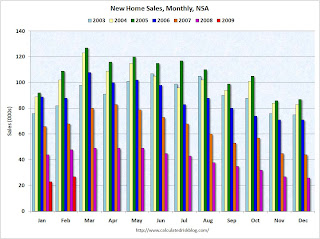 Note the Red column for 2009. This is the lowest sales for February since the Census Bureau started tracking sales in 1963. (NSA, 27 thousand new homes were sold in February 2009; the previous low was 29 thousand in February 1982).

As the graph indicates, sales in February 2009 are substantially worse than the previous years. 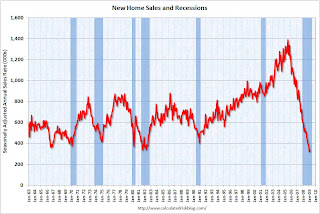 The second graph shows New Home Sales vs. recessions for the last 45 years. New Home sales have fallen off a cliff.

Sales of new one-family houses in February 2009 were at a seasonally adjusted annual rate of 337,000, according to estimates released jointly today by the U.S. Census Bureau and the Department of Housing and Urban Development.

And one more long term graph - this one for New Home Months of Supply. 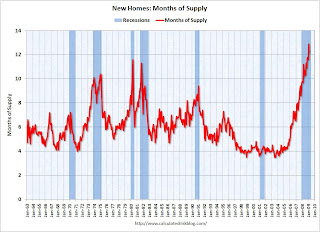 The seasonally adjusted estimate of new houses for sale at the end of February was 330,000. This represents a supply of 12.2 months at the current sales rate. 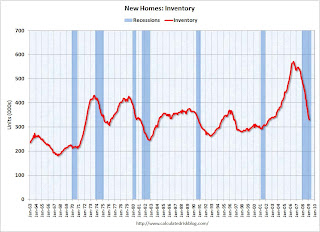 The final graph shows new home inventory. For new homes, both sales and inventory are falling quickly - since starts have fallen off a cliff.

This is a another extremely weak report. Even with the small increase in sales, sales are near record lows. And months of supply is also just off the record high. I'll have more on new home sales later today ...
Posted by Calculated Risk on 3/25/2009 10:00:00 AM
Newer Post Older Post Home