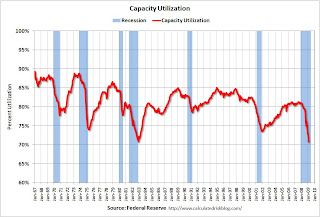 The Federal Reserve reported that industrial production fell 1.4% in February, and output in February was 11.2% below February 2008. The capacity utilization rate for total industry fell to 70.9%, matching the historical low set in December 1982.

The significant decline in capacity utilization suggests less investment in non-residential structures for some time.